The Nuances of Interpersonal Effectiveness Series, #9: The Real Value of Reverence in Relationships 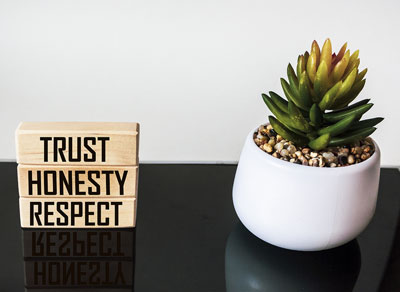 Reverence is a dignified word.

Since I’m a self-professed non-fancy word kind of guy, I had to look it up. It sounded so, well, fancy to me. This time I like the Merriam-Webster definition better than anything I could have come up with. The definition of reverence is “respect felt or shown.”

I love that. It’s so simple. Success in relationships comes down to respect that goes both ways. Respect that you feel coming from the other person, and respect you show to the other person. The enormous value of reverence is true in marriages, friendships, families, communities, and work relationships. Rather than trying to break respect down into 7 Easy-to-Remember steps, I’m just going to share with you one remarkable example of reverence in my life.

I met Hutch in 1978 when we were 15-year-old sophomores in Mr. Calacci’s World Cultures class. We sat right next to each other. Hit it off from day one. He’s been my best buddy for 43 years.

In high school Hutch was already a salesman extraordinaire. He went on to have a fabulous career in sales as a sales person and mainly as a sales executive. He’s worked for Proctor & Gamble, Brach’s Candy, Boston Scientific, Medtronic, Motus GI, and a few other great companies. He’s lived in Texas, Minneapolis, Chicago, and Nashville.

I was an aspiring teacher when we met. In the summers I worked at camps for grade school kids, and then went on to be a high school math teacher, soccer coach, and then an executive coach and seminar leader. I lived in Indiana, Chicago, and St. Louis.

Since 1981 we went to different colleges, lived in different cities, and worked in different industries. Hutch has three children and I have two children, and they are all in their twenties. Our personal and professional lives never overlapped, except for three magical weeks in 1989 when we lived together in Chicago as he was moving to Chicago, and I was moving out.

And yet somehow we have managed to talk at least once every other week for 43 years.

Last weekend for the first time ever the four of us spent a weekend together in Nashville without anyone else. And we had a blast for three days. It was as if we were together all the time.

How in the world have Hutch and I been able to maintain such a high-quality friendship over the past six decades?

It all comes down to that fancy word: reverence.

Imagine if every relationship in our lives was filled with reverence. What would our work lives be like? What would our families, our communities, our politics, and our world be like if we could all value reverence as a top priority?

In 1993 a slim book called, Reverence for Life, was published, and a second edition came out in 2016. This is a collection of statements from Albert Schweitzer, the famous jungle doctor, that were culled from more than 50 years of his writings. Reverence for Life was the core philosophy of Schweitzer who lived from 1875 – 1965. This little book is filled with powerful statements about the importance of reverence in relationships.

Here is a quote from page 9, which Schweitzer first said in an interview in 1959:

“When we are truly filled with the idea of Reverence for Life, all our attitudes, thinking, actions change. We must go deep into ourselves to find inspiration. If we turn within, pondering our duty in this world in silence, and act to move toward this goal, a change will come about. There are many opportunities to prove that we live in the spirit of the philosophy of Reverence for Life.”