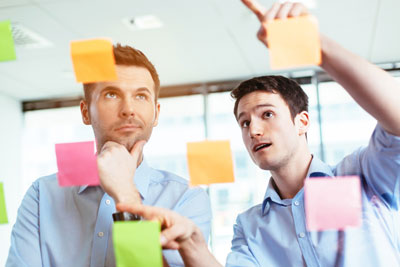 Let’s start with a definition.

In Merriam-Webster Dictionary, synthesis means “the combining of often diverse conceptions into a coherent whole.”

One of your most important roles as a leader is to synthesize ideas and guide the combining of ideas to produce something that is of even greater value. This means to constantly reach out to other people for their ideas and to observe people in a variety of situations to capture ideas. It means to read books, magazines, articles, and scour the internet for useful ideas and insights that can be combined into something more powerful.

At his best, Walt Disney was a synthesizer of ideas. He would read books, take his children on vacations, think back to his desires as a boy for trains and happiness, listen to his team members, and then look for ways to combine ideas. From that synthesis came Disneyland, The Mickey Mouse Club, animated fairy tales, The Wonderful World of Disney, and on and on.

John Lennon and Paul McCartney sat literally right next to each other in the small house where Paul McCartney grew up as they shared their ideas for songs with each other. During a mind-boggling, ten-year collaboration they created songs that set the standard for popularity and impact for over 50 years. It took their abilities to synthesize ideas together to create one masterpiece after another.

Oprah Winfrey is a master synthesizer. A fascinating interview not only showed up on her tv show, but in her magazines, book clubs, and promotions of other people’s work. She has done that over and over and over for over 30 years. Leaders look for ideas from multiple people and sources and then weave the ideas together to produce even more great ideas.

Here’s a key point about leadership: you don’t have to have all of the answers. Ask good, open-ended questions. Gather ideas and connect them together. This is an effective way to influence how other people think so they make decisions that improve results for them and for other people in sustainable ways.

Doris Kearns Goodwin invested more than 50 years in studying the lives and presidencies of Abraham Lincoln, Teddy Roosevelt, Franklin Roosevelt, and Lyndon Johnson. She then stepped back to see what lessons could be extracted from her research. She then synthesized these ideas into her remarkable book, Leadership in Turbulent Times, in 2018.

Seth Godin has been my primary mentor for the past three years. I just finished taking his latest creation, The Creative’s Workshop, which was a masterful 100-day course with more than 500 people around the world taking it at the same time. Every day we wrote our Dailies on what we were thinking and creating, and we shared our thoughts with the whole community. You could read anyone’s ideas and anyone could comment on yours. Absolutely amazing degree of synthesis going on.

During this pandemic as I rarely left my home, I decided to sign up for masterclass.com, which is an on-line set of experts who teach on different topics. There are over 85 teachers and each one provides about 15 lessons. This has been an incredibly good investment. For one year you can watch as many lessons as you want for $180.

One teacher was the film director, Ron Howard. He talked a lot about the value of collaborating with the script writer, other directors, actors, production designers, editors, and so many other people. As he said several times, the director is the keeper of the story and has the final say on all decisions. However, those decisions and the film itself can be greatly improved by exchanging ideas and learning from other people’s insights.

During WWII, Winston Churchill had a War Council where people could share ideas with him and didn’t have to worry that he would get angry with them. He wanted to see ideas from various angles.