The Actions of Leadership Series, #4: Meet Situations As They Arise 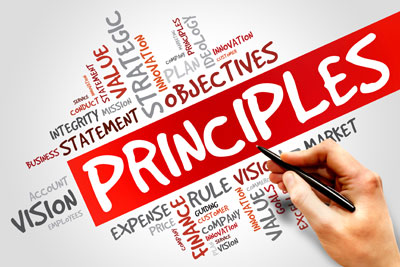 There are some really exciting moments as a business leader.

You’re standing on the platform giving the keynote speech at a big all-company conference. The audience is sitting on the edge of their seats. You announce a major new strategic direction for the organization, and the crowd goes crazy.

You’re sitting at the boardroom table at company headquarters. You announce to the team that the organization has just broken the all-time sales record.

Those moments make up about .05% of your life as a business leader. Most of the time you are dealing with situations as they pop up.

One Moment at a Time

Most situations that pop up during the day cannot be anticipated:

We could go on and on.

You can’t prepare for a moment that you don’t know is about to happen. However, you have to meet the situation head on. If you wait until you’ve had time to practice for it, the moment will be gone.

So what do you do?

Think of principles and protocols.

Principles are your Code of Conduct. It’s incredibly important that you clearly define your Code of Conduct before challenging situations pop up. Otherwise, you could spin your wheels for a long time before deciding what to do. In most situations you don’t have an unlimited amount of time to make a decision and move into action.

A great example of principles is what happened in the NBA recently. Daryl Morey, the GM of the Houston Rockets, texted: “Fight for freedom. Stand for Hong Kong.” The Chinese Basketball Association was furious and removed the Houston Rockets games from Chinese television.

And then something remarkable happened…

Adam Silver, the commissioner of the NBA, supported Daryl Morey’s right to freedom of speech. He didn’t punish Morey. A new situation arose and Silver depended on his Code of Conduct to develop a response. He said, “The NBA will not put itself in a position of regulating what players, employees and team owners say or will not say on these issues. We simply could not operate that way.”

CCTV (Chinese State Television CCTV) then made a statement strongly disagreeing with the league’s stance on Morey’s comments:

“We’ve noted that Adam Silver, the commissioner of the NBA who has been attending events in Japan, has responded to the inappropriate comment on Hong Kong made by the general manager of the Houston Rockets, Daryl Morey. We voice our strong dissatisfaction and opposition to Adam Silver offering as an excuse the right to freedom of expression. We believe that no comments challenging national sovereignty and social stability fall within the scope of freedom of expressions. In light of this, China Media Group sports channel has decided to immediately suspend the current plans to relay broadcast the NBA pre-season (China games) and will immediately undertake a full check of all cooperative exchanges involving the NBA.”

Even in the face of a potential massive loss of revenue, Adam Silver stuck to his Code of Conduct. He said, “I understand that there are consequences from that exercise of freedom of speech, and we will have to live with those consequences.” Silver went so far as to say the league isn’t apologizing for Morey’s freedom of expression, but instead “regret that so many people are upset.”

A protocol is a set of step-by-step guidelines that you can use in a variety of situations.

I encourage you to develop your protocol for different situations like a media crisis, an operations crisis, an employee crisis, etc.

I used to work a great deal with companies in the restaurant industry. One day there was a Mad Cow Disease report in the newspaper. The executives I worked with scrambled to deal with the situation.

The next day one leader said, “What is our Mad Cow protocol going to be from now on?” The team worked for several days to put in place a set of step-by-step guidelines that they could pull out in a moment’s notice. Then they communicated the new protocol to all of the relevant individuals.

A few years later another report popped up in the newspaper. The team followed the protocol immediately and resolved all concerns very quickly.

What protocols can you put in place and communicate on how to deal with various situations?