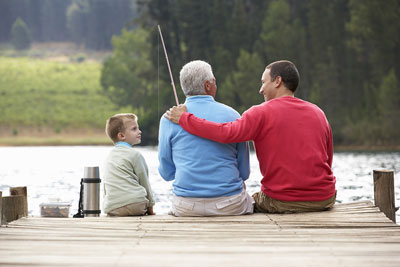 Dads have been on my mind lately.

For the first time I do not have a father figure in my life. However, those two men had an enormously positive impact on my life, and their influence in so many ways is engrained in me. I think the lessons they taught me have value for dads who want to be successful business leaders. Here are some of the lessons I learned from them.

How do you make your family your first priority every day?

They both worked for 40 years. Dad worked at Laclede Gas Company for 40 years, mainly as a salesman in new construction, from 1949 – 1991. He was up every day by 6 AM. He put on a suit every day and went to work. Pa was a Senior Minister for two different United Church of Christ churches from 1952 – 1992. I only knew him after he retired, but I’ve heard many stories about him teaching Confirmation Classes from 8 – 10 AM on Saturday mornings, and leading the church in many other activities they took on. He literally had to leave town during vacations in order to step away from the work of the church.

Are you giving your work your best effort? Keep your family first, but take your work seriously.

In many ways these two remarkably influential men lived simple lives, and they wanted it that way. Being fancy was not in their nature. Dad used to say when friends came to our house for the first time, “We’re just plain folks. You can just be yourself here.” Pa had absolutely no interest in being fancy. If I spent too much money on a new sports jacket or suit, he would look at me in a funny way.

Look at your life. What can you do to simplify various areas of your life?

Lesson #4: Show you can handle responsibility.

If you can’t be responsible enough to be a good dad, how can an organization possibly trust you to be responsible for large numbers of employees and significant financial investments? If you take shortcuts at home with your children, how do you keep that habit from creeping into your work? We are who we are wherever we are. We can’t fake it for very long. The habits you have at home are likely to become the habits you have at work.

What are your responsibilities at home in the next two weeks? Do them well.

What are your responsibilities at work in the next two weeks? Do them well.

Do them in that order.

Are you handling the money you earn intelligently?

Obviously I’ve been very lucky to have two wonderful father figures in my life. Two men who engrained in me a very specific code on how to live my life. No shortcuts. No living on the fringe. No playing around with the important relationships in my life.

However, I’ve come to learn that some dads are not like that. They leave their kids either before they know them, or when they are very young. In some cases, dads physically or sexually abuse their children.

I can’t think of anything crueler or more awful than a father who abandons or abuses his children.

If you were man enough to create a child, then be man enough to raise the child in a loving way. Be involved in the child’s life. Care about the child’s well-being. Listen to the child’s dreams and do what you can to support that child on a path that strengthens his or her self-esteem.

Being a dad is more important than being a business leader. It’s way, way, way more important. As a dad you will have a lasting impact on another person’s life either positively or negatively. Choose how you want that impact to turn out.

I have a quote by my bed and in my office. It’s a double daily reminder that I’ve had since my daughter, Sarah, was born on April 21, 1999.

It says, “100 years from now it will not matter the type of house I lived in or the kind of car I drove, but the world may be different because I was important in the life of a child.”

Here’s to you, Dad and Pa. Thank you for the incredibly important impact you had on my life.