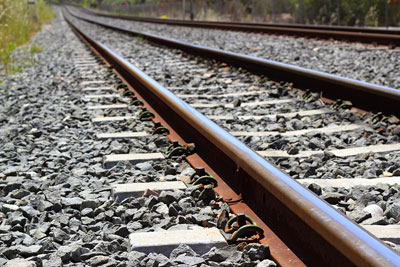 On the fourth of July I had an experience that I would rather not have lived through, but it taught me several powerful lessons with multiple implications.

After the fireworks display at a large city park, I was driving my family and my daughter’s friend to our house. There were adult volunteers directing traffic and so I paid attention to them and to the car in front of me. I didn’t pay attention to any road signs or warnings. Traffic moved along steadily until we all came to a halt for a red light. I was about three feet from the car in front of me and about three feet from the car behind me. Then I realized I was stopped directly over a set of railroad tracks. Sarah’s friend said, “This is making me nervous.” I said rather nonchalantly, “If a train comes, we’ll all run out of the car. Our lives are more important than this old mini-van.” In my mind I thought there was no way that the volunteers would have guided us over the railroad tracks if the trains were running at that time. Two minutes later the light turned green, and I moved ahead with traffic. Another minute later Barb turned back and said, “Now there’s a train coming where we were.”

I got very little sleep that night. We were in danger and I didn’t realize it. I did not have a well thought-out plan, and I didn’t proactively respond when I realized we were stopped over the tracks. I spent the night thinking about what I should have done differently. I should have looked for warning signs and not just followed the volunteers waving us forward. That way I could have stopped the van before we got to the railroad tracks. When I stopped over the tracks, I should have immediately started backing my van up and then moving it forward to try to create enough space to get off those tracks. And I should have gotten everyone out of the van if we were unable to move. I should never have assumed that no train was coming when we were obviously in danger.

Here are some ways this scenario plays out in life and in business.

IN AN INDIVIDUAL’S PERSONAL LIFE

A woman dates an attractive, fun, funny, and charming man. Family members and friends all enthusiastically approve of this person. Then one night after going out with friends for drinks this woman is slapped hard across the face by the “charming” individual. It only lasts for a second and it never happened before. Is this a warning signal or a moment of drunken stupidity? The woman chooses to ignore the incident and it never happens again. The two people get married. After the wedding reception, the newlyweds go out for drinks with a small group of friends. Later that night in the honeymoon suite, the husband slaps his new wife twice very hard. Now she realizes that her life is over the railroad tracks. She has to decide immediately to back up and get out of the marriage or to pull ahead and set up immediate counseling for her and her husband. Her other option is to do nothing and hope that the train never runs over her life.

ON A WORK TEAM

A group of eight people are given an important project. Seven of the eight work very hard and make tremendous progress. The eighth person skips meetings, fails to return calls and emails, and drops the ball on key assignments. However, when the group’s supervisor attends a monthly update meeting, this person always says something that catches the supervisor’s ear as being really insightful, even though the comments are not based at all on the realities of what the group is doing or finding in their efforts. Should anyone in the group speak up and clarify for the supervisor what is happening? They all decide not to. Then this person is promoted to being in charge of an even more important project. Is the company parked over railroad tracks? Should anyone intervene or should they all let it go and see how the critical project evolves?

An entire company is experiencing record sales because of a new product that doesn’t really fit their brand at all, but has become a temporary fad in society. Should everyone just keep fulfilling customer requests and take their eye off of what made their company successful in the past or should they shift gears and build their brand around this new product? Time is of the essence. If they go all out to support their new product and ignore their existing products, they will endanger the delivery and quality of their other products and risk their long-time customer relationships. They are sitting over railroad tracks and they have to decide what to do.

All of these scenarios are real. And all involve the same dynamics that I faced in driving my family home. Well-intentioned people are waving you on as though everything is going great without realizing they are directing you toward a potential catastrophe. You have to be willing to look out for warning signs. If you choose to move ahead and find yourself “stopped over railroad tracks,” you have to make a decision. Nonchalantly choosing to do nothing and just waiting things out is a decision, but is it really the wisest decision? Looking back, I realize that it was the wrong decision for me. I encourage you to be proactive and really think through what you believe is the best thing to do, and then follow through on your decision.